The first month of the new year has been a dazzling show of ice and snow. We were treated to two snow storms that left the Farmstead blanket with snow for weeks. This gave the Sprouts a chance to engage with water in a new way.

Some of the Sprouts noticed that while some of the files held a thick layer of snow for many days, other parts of the field were green as the snow had melted more quickly. The group discussed potential reasons like the chickens scratching closer to the coop and part of the field getting more sunlight. The Sprouts also noticed that some of the snow was soft but most had slowly tinted into a harder, crunchier type. We talked about how the sunlight changes each day and night, exposing the snow to alternating freezing and thawing temperatures. The Sprouts have had lots of fun engaging with the various forms water takes as it changes back and forth between it’s liquid and solid phases. 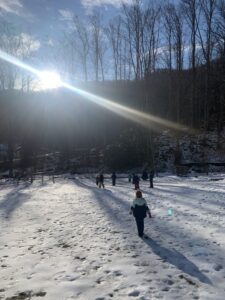 While most of the plants around the Farmstead are dormant, some green still covers the ground. The grass of the field as well as a wild garlic-onion relative bring a vivid green and the evergreen trees provide a more dusty green in the background. We even found some dandelions in bloom and daffodils preparing their flower buds.

The Sprouts often notice and describe the way the sky looks(i.e. whether it is sunny, partially cloudy, cloudy, or full of dark clouds). They have more recently begun using the patterns they notice in the sky to make predictions on the type of weather we will have like if it’s sunny the snow will melt, if it is cloudy and cold it will be icy, and if it is dark and windy we may get snow or rain. The Sprouts are getting the opportunity to practice making observations and making predictions from those observations. The Sprouts got the chance to form a strong connection with the results of their predictions because of their immersion in the outdoors.