June has been the month of critters around the Farmstead. We have seen so many individual creatures, as well as many different types. We noticed early in the month that the willow tree has a couple of colonies of tent moth caterpillars. They work together to create a tent, trapping some of the leaves of the willow tree inside. The students marveled at the complexity of the structure and we discussed how it might be possible for little caterpillars to create something so complex. We noticed that there wasn’t just one caterpillar in there, there were many. One of the students suggested that it might be possible because they work together as a team. The students continued to engage with the idea of teamwork by working together to build their own shelter in Pine Play.

Some of the students found a salamander in the creek and noticed that it had no tail. Some of the students thought that maybe it lost its tail while some thought that maybe it never had one. We decided to read some stories about salamanders to learn more and discovered that they can lose their tails but that they can grow them back. We talked about how even if it grew back, it would still be unkind to take them off on purpose. Someone mentioned that humans can lose their hair and nails but it would not be kind to cut it off without their consent, even if it grows back.

June has been a pretty dry month with the occasional rainstorm. On the wet days, many students had lots of fun splashing in the mud puddles that formed. As the days passed without more rain, many students noticed that the puddles were beginning to disappear. Some thought that maybe the water was seeping through cracks underground, and others suggested the water may have dried up and gone into the air. We discussed how maybe both of those things could be true at the same time.

Lastly, an exciting thing we have been watching over the course of the month is the 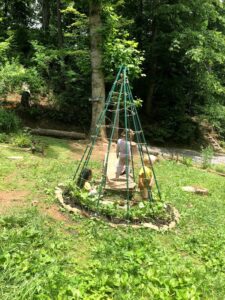 sunflower house that was created by Gracie. She created a frame from polls and planted sunflowers and beans in a ring around the base. The students have been checking on the progress of the plants, comparing their heights to themselves. The sunflowers are still about ankle height while the beans are now at some of the students’ shoulder height. It has been an exciting way for the students to make comparisons of relative sizes, and to practice their long-term observation skills.

I’m so excited to see what new creature we may see in July as we continue playing outside all summer!