Spring is in the air and this month the Sprouts have been excitedly discovering new creatures and plants as the forest begins to come back to life. We have been treated to the songs of birds above and the Sprouts drumming on logs down below. The warmer weather has also led to more time playing with water.

The Sprouts have noticed many new critters starting to stir. The first things we began to notice in abundance were many roly-polies and worms under logs and places with more moisture. We also started to see lizards, spiders, and more birds. The Sprouts often like to play with mud when making potions, soups, or even redirecting water to create new ponds and creeks but this month I noticed much more fine motor skill-related activities like sculpting. The sculpting Sprouts were proud of their creations, making things like small spheres, pyramids, pine cones, fairy houses, and even a pen made from a chicken feather with a small ball of mud on the tip.

The Sprouts often engage in more imaginative play when interacting with nature and it is amazing to see new ways they see the forest through a lense of imagination. Some of the Sprouts were standing with their backs or bellies pressed up against the trees and when I asked what they were doing they told me that the trees were magnetic and that they were stuck. The only way to get free is with more powerful magnets. Suddenly a few of their friends joined us with rocks in hand and exclaimed “I have a super magnet, it’ll set you free, let’s go!” The magnetized kids unstuck themselves from the trees and followed the powerful magnets their friends had back to their homes. Not only were they engaging with the concepts of magnetism and relative forces, but they were also modeling compassion by rescuing their friends all while immersed in their imaginative mindset. 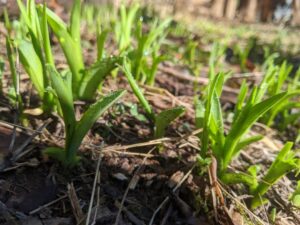 The Sprouts have also been coming up with new ways to use the loose parts of the forest. Selling ice cream has been a popular way to interact with the bark of the forest all year but more recently some of the Sprouts have used large pieces of bark and dead leaves to craft nature books. They used the bark as the covers of the books and filled them with leaves and other pits of dead plants and shared them with their friends, creating narratives in the moment and describing the images on the pages. Some of the Sprouts took bits of bark and colored them with chalk to create colorful dragon eggs and then hid them around the forest. They found some friends and guided them on a treasure hunt to find the hidden eggs.

March has been a month of both cold and warm and while we’re saying goodbye to the ice and frost of winter we are also saying hello to the flowers and insects of spring. I’m excited to see how the Sprouts grow and play as the Farmstead blooms around them.