August is a busy month closing Camp Farmstead and preparing for the school year. We were able to enjoy the last couple of weeks of camp, and the campers shared some wonderful Nature Notes. The campers observed lots of bugs, birds, and weather changes this month. Several cicadas were spotted, along with butterflies and caterpillars. The campers noticed an increase in yellow jackets and bees. Some campers were even lucky enough to watch a yellow jacket harvesting a cicada, the kids thought maybe she was eating it to fill her belly, or she was bringing it back to her babies to feed them. Campers also observed that cicadas could be really loud until they go to sleep, then they figured out the wings stopped moving, so the noise stopped.

Several birds were spotted in addition to the chickens, including hummingbirds and a blue heron flying over the field. There was an increase in the number of toads that the campers found. Some were found in Pine Play, and others 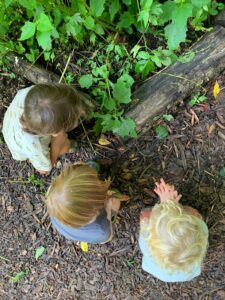 in the Blueberry Patch.

When the wind would blow hard, the campers noticed leaves would fall down and look like rain, they would run all around and see who could catch the most leaves. Several campers opened up shops, some would paint faces using crushed-up chalk as face paint, and others sold mud balls. Other campers built fairy houses, and some continued to work on building dams in Creek Kitchen.

We had a great summer, and we will be missing our campers, and we are excited to see what the new school year holds!