February started off with strong winter weather and began to show us signs of spring as the month came to a close. The Sprouts noticed that the snow we received was still sticking around in certain spots around the Farmstead. It wasn’t sticking around everywhere, just in the places that didn’t get much sunlight like along the boundaries on the trails and in the shadows of rocks & stumps. Even after the last traces of snow melted, we still experienced some cold weather. We talked about how the ice we were finding on the plants wasn’t snow, that it was actually frozen dew or frost. 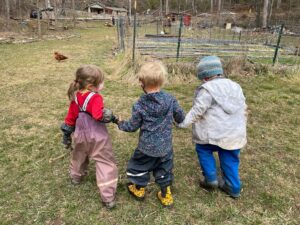 One section of the field gets particularly muddy in wet weather and to help protect that area of the lawn we use pink flagging tape as a visual boundary. We don’t walk in that spot because our boots can hurt the roots of the grass and stop it from growing. When the wind hits the tape just right it can wiggle and move around in the breeze. Some of the Sprouts noticed that the tape was dancing like a ribbon and that it looked like waves you can see on the surface of water, making a connection between two forms that waves can take as they travel through a physical medium.

The later part of the month has shown us lots of signs that spring is almost here. We have noticed lots of arthropods like rolly-pollies, red velvet mites, hoverflies, and lots of ants and ant pupae. When exploring under some logs the Sprouts found some ant nurseries full of larvae and pupae. We got to have a conversation around empathy as we talked about how the big sister ants don’t want their little pupae sister to be eaten by predators and watched as the ants moved them down into the tunnels to keep them safe. We have also noticed more and more birds bringing movement and music back to the forest and that the spice bushes have buds that are starting to grow.

We have had a beautiful mix of winter and spring weather this month, giving us a chance to say goodbye to winter, and hello to spring. The crocuses, daffodils, and dandelions are blooming and we are so excited to see what blooms next as we spend more time outside.