I can’t believe that the school year is wrapping up. The kids have been loving the warm weather and all the green and flowers that have been growing! The Sprouts have been making all sorts of observations during Nature Notes. They have noticed small changes and big changes, they noticed the buttercup flowers have come and gone, they’ve noticed woodpeckers and tulip poplar flowers, and they noticed that some poison ivy near the garden had been removed. They also noticed that mushrooms grew after all the rain. Their observation skills are really on par! 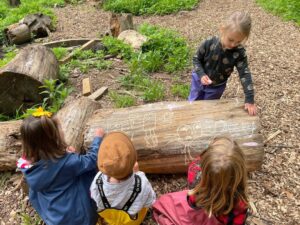 They have spent lots of time using their muscles. They’ve been digging holes, making dams, and making tunnels all around the creek, they have been climbing trees using the climbing rocks. They’ve used rocks and their muscles to sharpen sticks, they’ve slid down the muddy hills, then rolled down the field getting all of the mud off of them. They also used chalk in several different ways, to color rocks, to color trees, to turn bark into cell phones, to carve into shapes, and to make into soup.

Several Sprouts were also enthusiastic to help us keep our trails clear of plants, by pulling the ones that were growing in the wrong spots. Sprouts have also been moving logs and rocks to find the bugs underneath them and learn how ants take care of their babies. It has been so fun to hear what they learn while they are here, I hope everyone enjoys their summer!

Help raise money for the Farmstead! Join us Dec 3rd from 3-6PM at the Funkatorium in downtown Asheville for a Funky Dance Party and Silent Auction Fundraiser! Dancing, local beer from Funkatorium (% of sales goes to Farmstead), amazing silent auction, and fun raffle items! If you are not able to attend, you are welcome to donate here: