Hello all, Mr. Frank here! We have had an exciting month at the Farmstead filled with ice, snow, hail, rain, sun, wind, and much more! The students have been lots of practice making observations and predictions about the weather each day. Most days the weather in the morning has been very different than the weather in the afternoon. This daily variability has given the kids lots of opportunities to predict what the weather will be like later and the chance to check their predictions. 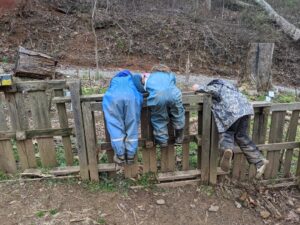 While we have seen lots of ice, snow, and other usual wintery phenomena, the students have also noticed some things that are surprising to see in January. On some of the warmer days, the Littlest Learners saw some ladybird beetles, flies, and even a wasp. Many of the plants are still green and some have even flowered!

The colder weather has meant that we have had fewer opportunities to play with water, but that hasn’t stopped the Littlest Learners from playing games that involve imaginary water. The Littlest Learners are using dirt and plant material as a substitute for water in their play and they are discovering some similar properties. Very fine-grained dirt can flow from a container when poured, like a liquid and it takes the shape of the container like a liquid too. They are engaging with fundamental properties of matter while they are making their earthy soup or coffee.
It is amazing to see how much fun the kids have while they are playing and learning in an ever-changing environment, and I’m excited to see what February has in store for us! 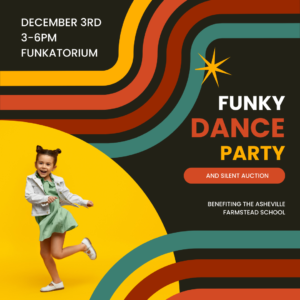 Help raise money for the Farmstead! Join us Dec 3rd from 3-6PM at the Funkatorium in downtown Asheville for a Funky Dance Party and Silent Auction Fundraiser! Dancing, local beer from Funkatorium (% of sales goes to Farmstead), amazing silent auction, and fun raffle items! If you are not able to attend, you are welcome to donate here: